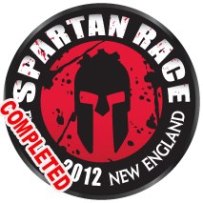 I actually never wrote about the Spartan I ran year before last.

I guess in part because I didn’t feel like I had to say what I was supposed to say about it.

First off, I say “ran,” like I actually ran any of it, which I didn’t.

I did get through it.  Sort of.  For a while I had a medical truck following me like some kind of EMS vulture. Like I was going to go down any second and maybe I was.

Folks, I wanted that empowering moment. I really wanted that TV moment, that video moment of HELLS YES I AM DOING THIS. I wanted… what do they say?  “You’ll know at the finish line,” like somehow I was going to have some huge revelation about myself.

Shit talking myself as I’m trying to do something kills me. Kills. Ends. Finishes.

I caught it way too late in the race. Because I was fat and slow and did some stuff really strong but mostly stumbled through it, burpees on burpees. I was alone the whole time, which totally sucked. I mean, I was alone except when people kept pace with me for a while then passed me. I think I was one of the last couple of dozen people in.

Anyway, I was on the top of this major hill, and I came out of the trees fucking aching, hating myself for the terrible showing and having flashbacks of failing firefighter agilities, and looking bad in my clothes and fuck knows what else. And I heard my voice, this litany of how I was fatter than everyone else and slower than everyone else and how I probably didn’t do all the burpees and cheated or something at the spear throw jesus fucking christ I thought. Like the hill isn’t steep enough and the mud isn’t thick enough.  Like this isn’t hard enough without this constant soundtrack of you suck you suck you suck going through your head.

Like every time I failed it was some kind of sick, twisted, wrong triumph.  Hah, see, you suck. I knew it.

Up at the top of the hill, I shut that voice up. Like I just… I shut it up. I said shut the fuck up, voice.

Look around yourself. It’s a gorgeous fucking day, you’re covered in glorious mud and you’re hiking in the woods. You got this far. Even if you didn’t get any further you got this far. You came all this way, why not fucking enjoy it?

Look around yourself. Woods.  Grass.  Nature. Shut up. Have fun. The fuck.

Any one obstacle was doable. The race itself was doable; I did it. I did it in shape far worse than I’m in now, undermedicated, with none of the cardio prep I should have done.

What I carried away wasn’t some sudden insight about how awesome I was.

What I carried away was how much, just how much I stood in my own way.

In the end, knowing that is probably worth the price of admission. I know these days that in the gym I just… don’t allow that shit in my head. Anything about fat, anything about weak. Anything about how I’m not here enough or not trying hard enough. I say “I believe in victory” a bunch of times, I listen to my music or watch the guys around me lay everything out, draw my inspiration from them.

Clear my mind of anything but the task at hand.

Just you and the iron, I think.

That’s it. Nothing else.