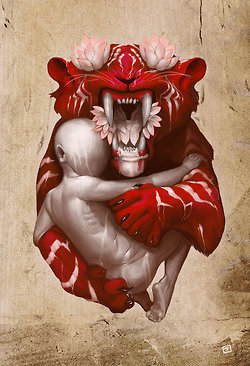 There was once a boy in Burma named Soe Than.


He was poor, and an orphan, and worked all his days as a laborer. The rest of the time, he painted.

Soe Than had no brushes, so he used sticks, and cloth, and even with just these things painted such amazing pictures that people would marvel. Many of his paintings were of things he’d never seen, like tall distant mountains, grey and blue and ringed in mist or wide green rivers all jade green, or tigers. Always tigers. Most often, tigers.

After his day laboring he would sit under a teak tree and people would come and watch, and this simple boy’s fame as an artist spread throughout the village, and even through the province.

Then one day Soe Than was visited by a Nat, who came to him as he painted and swirled around him all foggy spirit and said “I have a gift for you. Paint the world.” And when Soe Than woke as if from a dream, he was holding a golden paintbrush.

Soe Than dipped the brush, and began to paint.

First he painted soup and rice, because he was always hungry and as he painted a warm ngapi smell rose and when he was done there was a meal in front of him so he stopped painting, and ate. Then he painted for himself a longyi, and shoes, and put those on in place of his tattered ones. Then he painted a lotus, and took it in curved hands and set it at the base of the tree where the Nat had appeared.

The next day Soe Than went through the village, painting rice and fruit and fish curry and sweet pashu mont and pairs of shoes. These he gave out to the poor like himself, and by the end of the day, everyone was talking about Soe Than and his magic brush.

Soe Than continued to paint. He painted a water buffalo for a farmer and he painted bangles for a little girl, and he went through the province painting and giving, but it wasn’t always shoes and oxen. He painted puppets for a puppeteer, that danced and leapt without strings. He painted a green and pink stick bug for a little boy to play with. He wanted to paint tigers, he missed painting tigers. But obviously he couldn’t paint tigers.

Now, the king heard rumors of Soe Than and his magical brush, and sent his adviser to Soe Than to command him to paint whatever the king desired.
Soe Than refused.

The king was outraged, and threw Soe Than into a dungeon, without food or water. Soe Than painted himself meals, and fruit, and little blue and green bugs to play with. Hearing that Soe Than had made himself perfectly comfortable in the dungeon, the king flew into an even greater rage, and sent his guards to kill Soe Than.

So the boy painted himself a trapdoor and escaped.

The king’s guards pursued him, but he painted himself a horse to ride away on, and fled to a remote village to the Kachin province far to the north, and tried to live quietly and without notice. He painted only small and simple things, just enough. Not too much. But one day he grew bored and forgot and painted a bright green monkey, and the next day the king’s soldiers came and arrested him.

They took him to the palace, where the king demanded Soe Than paint him a vault of treasure. Scared now, and tired of running, Soe Than complied, hoping this would satisfy the king and he could go and live in peace again. But the king demanded another vault, and another. He painted so many vaults on top of each other that they all collapsed, but the king didn’t care.

“Paint me a huge palace,” he told Soe Than, “larger and more resplendent than any other.” So Soe Than painted him a fantastic palace, with towering spires and marble floors and gold leaf adorning the walls. “Make a garden,” the king demanded. “The most beautiful garden anyone has ever seen.”

Soe Than painted a beautiful garden. It was full of white and yellow orchids, and fragrant sabae, and huge pink lotus flowers. “Make the garden bigger,” the king demanded. “And all the lotus should be white. Do it at once!” Soe Than made the garden bigger. Narrow paths twisted through it, tall trees rose up making dark, deep glens.

“I’m finished,” said Soe Than. “You have a beautiful garden, and a beautiful palace, and there is nothing wrong with a pink lotus.” And he calmly and quietly put away his brush.

“Bigger! White!” shouted the king and summoned his guards to force Soe Than to do his bidding. But Soe than had left his paints behind and walked into the garden.

It was the biggest garden in all of Burma, maybe all of the world.

The king followed, and all the guards. Neither Soe Than, nor the king, nor the guards were seen again.

The palace crumbled, over time, but the garden flourished. Only the very brave will venture into it to see its wonders, though.

They say it’s full of tigers.